“We created Antaris to make space easy,” said Tom Barton, co-founder and CEO of Antaris. “Our platform dramatically simplifies the way satellites are designed, built and operated, and we are excited to accelerate our development efforts with this new funding round. “Space has been hampered by extraordinarily high costs, supply chain constraints and lack of vendor interoperability. We intend to change all of that.”

The funding will primarily be used to onboard new talent and accelerate the development of the Antaris Open Space platform, which includes modular satellite design tools, virtual True Twin satellites, integration with verified manufacturing partners and interfaces with a full suite of mission control solutions.

“Antaris aims to streamline the way we build and manage satellites in low Earth orbit,” said Chris Moran, vice president and general manager of Lockheed Martin Ventures. “We invested in Antaris because we believe in their mission to bridge space and cloud technology, and simplify operational management throughout a satellite’s lifecycle.”

“The launch of Janus I in the coming months will be a key milestone for Antaris and our valued partners,” said Karthik Govindhasamy, Co-Founder and Chief Technology Officer of Antaris. “We are fundamentally revolutionizing access to satellite technology, and it’s all about our unique end-to-end software solution approach for all aspects of the satellite life cycle.”

The Antaris founders previously held key leadership positions at satellite disruptor Planet Labs and were part of the team that launched the largest commercial imaging constellation ever. 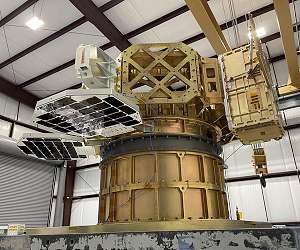 Spaceflight Inc., the world’s leading provider of launch services, announced that it has signed an agreement with SAB Launch Services Srl (SAB LS) to fly its Sherpa Orbital Transfer Vehicles (OTV) on Arianespace Vega missions. The agreement extends Spaceflight’s launch capability on European missions managed by Arianespace for Spaceflight’s OTV-based services on launches beginning as early as next year. The companies are also teaming up to offer customers access to shared integration and storage facilities across… read more

GAD Capital Notes All Your Self Storage Loan Options Evaluated

You may be seeking self-storage loans for many reasons. First, if you run a self-storage facility, you can only generate as much money as you have storage space. It’s possible to have too much merchandise and no place to store it, even if you don’t operate a storage company. A storage unit business loan will […]

Designed for Swiss-style CNC machining, programming, cycle time optimization and full machine and process simulation. Stillam CNC Programming Solutions has announced that it has been appointed as the South African distributor of Esprit CAM software, a product which was created in 1982 by DP Technology and is now part of the Hexagon AB stable. Their […]